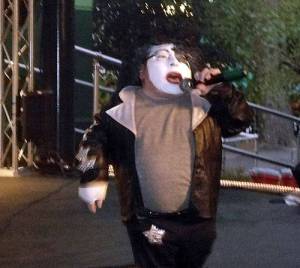 Small Paul at Canobie Lake Screemfest. KISS on the short side.

You have to love Canobie Lake Park in New Hampshire. In October, a month not known to be kind to New England amusement parks, Canobie Lake keeps the grounds filled by having two events:  Screemfest and Oktoberfest. This year I returned, once again lured by the presence of Mini Kiss, a KISS tribute band, at the Oktoberfest tent. (Well, also lured by the haunted houses and rides, but Mini Kiss is a consideration.)

Mini Kiss is always a great time. They cover Kiss songs as well as some other notables such as “Sweet Child O’ Mine” by Guns and Roses. I’m not sure if it’s the quantity of beer being served or the novelty of having these mini men singing, but the audience joins in on every song. While singing along with the song “Beth,” I pondered the reality of the events in contrast to the sanitized, love ballad version.

At the time Beth was recorded in 1976, cell phones didn’t bulge in every pocket. Beth was relegated to (probably) standing in her kitchen on her landline phone hoping someone would answer the payphone at the recording studio. Since there was no caller ID, there wasn’t a foolproof method to duck the calls of curious, demanding girlfriends or wives. Some poor sap, a roadie no doubt, would have to physically pick the phone up and figure out who was on the other end of the line. Then he’d have to holler into the recording studio to call Beth’s boyfriend to the phone. I can only imagine the reaction of the band to Beth’s calls looking for an estimated time of arrival on her beau.

And, as if his staying out late and not giving her a heads up didn’t rankle enough, listen to his excuses in the lyrics:

“Beth, I hear you callin’
But I can’t come home right now
Me and the boys are playin’
And we just can’t find the sound
Just a few more hours
And I’ll be right home to you
I think I hear them callin’
Oh, Beth what can I do?”

You can almost hear his band mates crack imaginary whips and call out rude comments  as Beth’s man frantically tries to shush them.

And what’s with Beth?  He asked “what can I do?”  He didn’t mention he was handcuffed to his instrument or being held at gunpoint.  It’s his choice to stay with his friends “a few more hours.” Instead of listening silently through her tears, Beth could have said,  “Come home in the next fifteen minutes or I’ll throw your stuff out on the street.” It’s domestic warfare, baby, sometimes you have to make threats. But not Beth, the date-able doormat.

When she calls again hours later,  her boyfriend can’t even come up with a new excuse.  Now, maybe he isn’t very smart or maybe he’s impaired by drugs and alcohol, but at least try.  If I was Beth, I’d be happy to hear your absence was because one of your band mates overdosed on drugs or two of them had a fist fight over writing credits and now you’re waiting for the cops to show up. When it comes to relationship lies, I believe go big or go home. But no, instead he tells her:

“Just a few more hours
And I’ll be right home to you
I think I hear them callin’
Oh, Beth what can I do?”

I’m calculating it’s around midnight at this point. If you’ve ever taken one of these calls in a relationship, you know he has no intention of coming home until he’s ready to pass out.  The best thing Beth could do for herself now is to take a sleeping pill and go to bed. Be fresh for the big fight when he staggers in at daybreak. But no, she continues to burn up the phone lines.

By 3 AM, the band has had enough. No one else’s girlfriend is calling. No one else is ruining boy’s night out. Time for the truth.  Now  he tells her:

“Beth, I know you’re lonely
And I hope you’ll be alright
‘Cause me and the boys will be playin’
All night”

Because at this point he realizes that Beth isn’t going to get dressed and come down to the recording studio and she isn’t going to stop calling. Telling her he won’t be home tonight might not stop the phone calls, but it will put an end to the whip cracking sounds from the band.  Anyway, after he hangs up a helpful roadie will leave it off the hook and Beth can listen to a busy signal for the rest of the night if she desires.

The next morning, boyfriend crawls home, hungover and tired, expecting a nice breakfast from Beth before he drags himself to sleep. She probably makes it for him because back in 1976 that’s the price you paid to be with the band.

I don’t miss 1976 that much. Now songs empower us to get our Louisville Sluggers and let our men know exactly what we think.  I’d love to hear Kiss sing a song about how quickly the studio empties out after that.